Preface: I championed Bubba Wallace for the #43 ride. I felt he would be a great addition to NASCAR and RPM. I’ve been a #43 Richard Petty fan since the 1950’s, and I wanted the best for the team, I believed that Darrell “Bubba” Wallace was the best fit for them. I’ve been a supporter and fan ever since. So this is written by someone truly invested in a desire for Bubba and Richard to succeed week in and week out. Even when my cousin was driving, I was torn between rooting for Jamie and rooting for Bubba. This pains me greatly to write.

Bubba Wallace was/is a race car driver and, some what of, a fan favorite in NASCAR. Life was good, he was driving for the KING and in the fabled #43! Sure, the glory days of the 43 were long behind it, but the mystique was still there. Only a privileged few had been blessed with the title of driver for that number, a number made famous by the KING Richard Petty himself.

Then is a fantasy race, with the importance of a box of Cracker Jack, Bubba became a victim. Kyle Larson let the N word slip. Bubba was the target, and Larson instantly lost his ride! This single word cost Larson tens of millions of dollars and thrust Bubba into victimhood and into the spotlight.

Now, literally just weeks after this fiasco, Bubba is at the center of attention again. At Talladega a crew member found a ‘noose’ in his garage stall and alerted authorities. Bubba claimed he had not seen it. NASCAR went into suicidal overdrive and Bubba was King for a day! Even getting his car pushed to the front by other drivers and an assist on track by yet another when he ran out of gas. 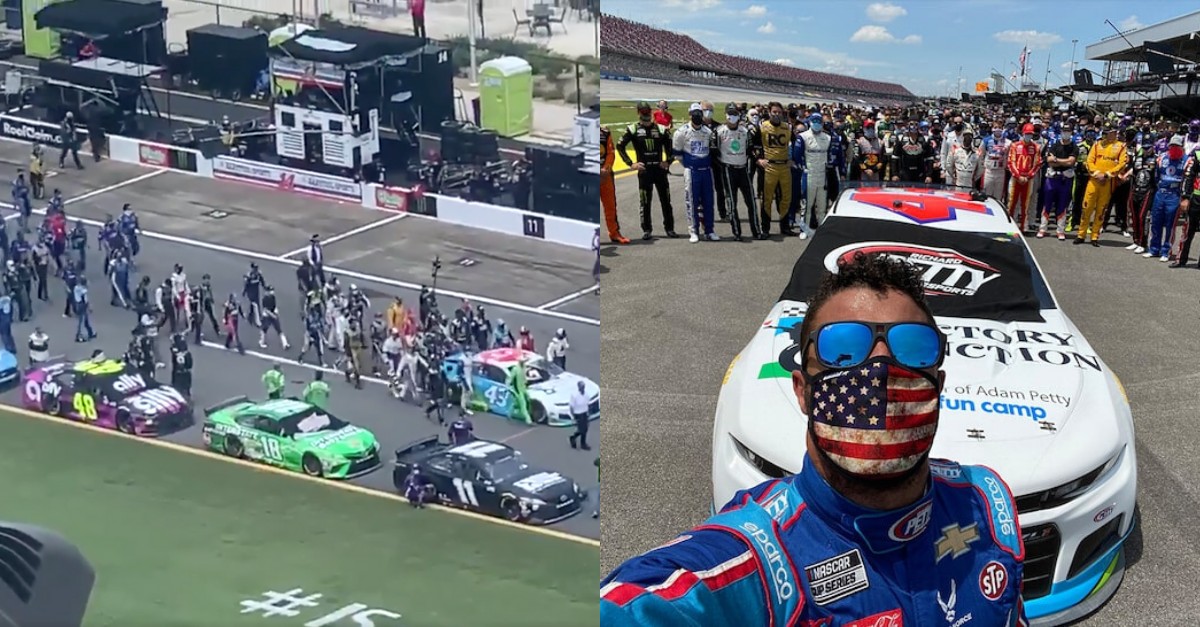 Bubba was in his new element, on top of the world! Bubba was a household word for all the wrong reasons, Bubba wasn’t a wheelman, a great driver, as phenom that dazzled the fans. Nope, Bubba was a victim! And it felt real good.

NASCAR called in the FBI to investigate! A noose in our only black driver’s garage stall could only mean one thing, a hate crime! Fifteen agents few to Talladega to investigate! Fifteen minutes after they arrived, they closed the investigation, any 3rd grader would have done the same. You see, all the garage stalls had the same ‘noose’ on their garage pull cords. Bubba hadn’t been targeted, BLM wasn’t the cause, the Confederate Flag ban had nothing to do with it, nope, it was just a standard knot used on commercial door pull down cords.

But, Bubba wasn’t done being a victim! He immediately rejects the FBI findings and schedules a pity party on CNN with Don Lemon. Here Bubba says he’s driven for years and has never seen a noose before, and this was a “straight up noose”. Only, Bubba had been quoted saying he had never actually seen the ‘noose’.

As a victim Bubba Wallace will never be a good driver. He’ll never be good at much of anything except being a victim. Kyle Larson truly hurt Bubba, because Bubba found an easy way to fame and acceptance. Bubba found victimhood.

I don’t often post reviews or plugs for businesses. But, I feel compelled to do so for a company I’m associated with. I’ve known the owners and worked with them for over 25 years. They Read more…

By now, you have to realize that Biden is nothing more than a puppet. He literally does what his earpiece tells him to do! Or, his teleprompter tells him to say! He is NOT our Read more…

Joe Biden Family, Inc., have far reaching energy connections. From the Ukraine to China, the more the USA spends on foreign oil. solar panels, or wind turbines, the more cash that finds its way into Read more…